The Hibs Are Here! 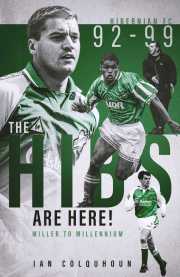 The Hibs are Here charts Hibernian's 90s journey, a fascinating period on the field and a momentous time off it, as Hibs transitioned to being a truly modern football club. Read and you will discover:

Ian Colquhoun is a disabled author and Hibs fan from West Lothian who has lived most of his life in Edinburgh. His first experience of journalism came at the age of 14, while on work experience at Easter Road, when he interviewed groundsman Pat Frost. Ian has written two other Hibs books: From Oblivion to Hampden and Hibernian On This Day, which he co-wrote with his friend Bobby Sinnet. His all-time favourite Hibs player is Darren Jackson.