Summer 1991 had seen Hibs survive financial turmoil and the club was free to concentrate on matters on the park, once more. The first home match of season 91-92 was actually a friendly against Ian Porterfield's Chelsea on 3rd August, who at the time were a mid-table side in England's top flight. They brought a strong side north. Hibs fielded a strong but young side with an average age of just 23. The match was played almost 5 years to the day since Hibs had demolished Chelsea 4-1 in 1986.  This time, 7508 fans saw another cracker as the sides drew 2-2. Dennis Wise gave Chelsea the lead from the penalty spot after 28 minutes, but youngster Steve Raynes equalised just before half-time. Veteran striker Kerry Dixon put Chelsea 2-1 up with 15 minutes to go, but Hibs got a deserved equaliser two minutes from time, Keith Wright getting a goal on his home debut, nodding in a cross from Mickey Weir. Chelsea’s team that day had included ex-Hibee Gordon Durie, future Hibee Kevin McAllister, Andy Townsend, Tom Boyd, Steve Clarke, Paul Elliot, Graeme Le Saux and goalkeeper Dave Beasant, so a draw was a great achievement for Hibs, whose battling performance augured well for the coming campaign.

Chelsea also brought on Graeme Le Saux, Damian Matthew and Erland Johnsen. Vinnie Jones wasn't in the squad. The match was so hastily arranged that there wasn't time to print a proper programme, just a simple team-sheet. (see below) 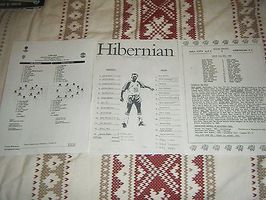